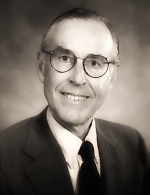 Dr. Challoner is Vice President for Health Affairs Emeritus at the University of Florida, having served as Vice President for Health Affairs and Chairman of the Board of Directors of Shands Health Care from 1982-1998.  He was formerly Dean and Professor of Medicine at the St. Louis University School of Medicine from 1975 to 1982, and previously served as Professor of Internal Medicine at Indiana University.

He is an elected a member of the Institute of Medicine (IOM) of the National Academy of Sciences where he served as Chairman of the Membership Committee, member of the Governing Council, and as Foreign Secretary.  He has been instrumental in the founding of the InterAcademy Medical Panel, the first global organization of the world's medical academies and served as its Co-Chair.  Its purpose is to increase the participation of the world's medical academies in local, regional, and global civil society.  He recently completed his multiyear appointment to the IOM's Board on Population Health and Public Health Practice.

He has held leadership positions in the Association of American Medical Colleges where he holds Distinguished Service Membership, the American Medical Association where he served as Chairman of the Section on Medical Schools, and the American Federation for Clinical Research, which he served as President.  His science policy positions include appointment by President Reagan to Chair the President's Committee on the National Medal of Science from 1988-90.  He served on the Advisory Committee to the Director of the National Institutes of Health, and the National Academies' umbrella Committee on Science, Engineering and Public Policy (COSEPUP), and the Governing Board of the National Research Council.  His other governing board responsibilities include the Board of Trustees of Lawrence University in Appleton, Wisconsin, and the Board of Directors of Cordis Corporation in Miami, Florida.